Cantatrice Voices began back in 2004 when 90 singers signed up (yes 90!) on the first day. Its sister choir in Horsham began three months later.

Over the years we have performed a huge variety of music from pop through to classical, singing at Open Gigs (Steynings own Live Lounge) to the illustrious venues of Chichester Cathedral, The Hawth, Crawley to St Clement Danes in the Strand, London.

Workshops by visiting professionals are a must for any choir who want to improve and David Lawrence, Brenda Rattray, Jeremy Jackman,  Jonathan Wilcocks were musicians we invited to work with Cantatrice.. They loved the energy, happiness and  over-whelming sound of the choir and of course lunch at White’s! Also arranged were Voicecraft workshops with Mark Oldman and Ruth Kerr, a valuable lesson on singing techniques when time does not always allow because of note bashing!

We love working with young musicians which are plentiful and willing in our area; many of whom have gone on to music colleges and who have returned to share in some more music making.

Over the years- apart from the social events (!) and the usual Christmas celebrations, the choir has performed with Worthing Symphony Orchestra at Worthing Assembly Hall  in the ‘Last Night of the Proms’ concert, for the 25th anniversary celebrations for ABCD (Association of British Choral Directors) at the Dorking Halls in October , returning there again for Choiroke – a massed choir sing masterminded by the charismatic Kaytie Harding. We regularly compete in the Mid-Somerset and Bournemouth festivals but probably the biggest challenge and highlight was our concert in St Clement Danes Church, the Strand, London as part of the ever growing Brandenburg Choral Festival.

Finally one could not have any choir without an accompanist and Laura Skuce was my absolute rock when it comes to support. A totally versatile musician, happy to play (& sing) classical, rock, folk & musicals and turn her hand to almost any instrument! She sadly passed away in 2013. The Choir is now accompanied by Zoe's husband Gary Prior who adds a new dimension and personality to this happy choir. 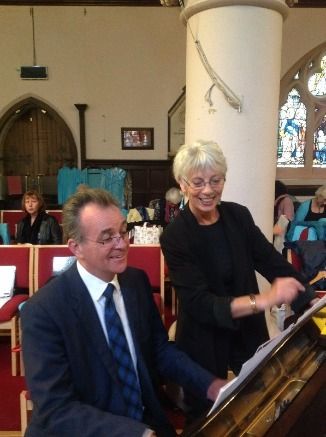 Gary & Zoe  have two children - Jim who is an instrument repairer, trombonist and conductor of the JP Big Band and Bryony - freelance horn player, singer and fully qualified Personal Trainer. 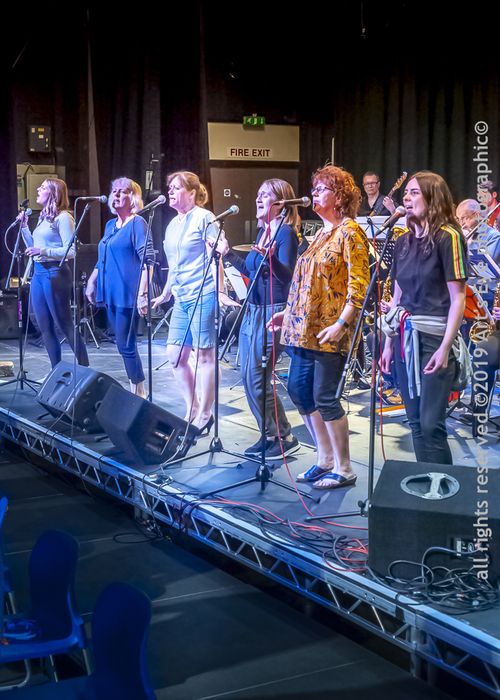 Zoë was born in Steyning and trained at Chichester College (where she met Gaz) & Trinity College of Music, London where she was awarded the Lady Maud Warrender Prize for outstanding achievements in singing and musicianship, and the Else Mayer Lismann Opera Workshop.

Having sung professionally for several years she fell into conducting in 2002. She now directs Cantatrice, the Kaleidoscope Singers and the mens group Vocal Fusion Acapella.
Zoe has been a tutor on the Earnley Courses (Chichester), for Choral Workshops and deputy staff for the Guildhall School of Music London & the Royal College of Music.

Gary studied at the Royal Academy of Music, London. On leaving there he became staff coach and repetiteur at the Mayer-Lismann Opera Centre.
He has appeared on BBC radio and accompanied for singers and instrumentalists at many venues in London and the south, including the Jubilee Hall - Aldeburgh, Fairfield Hall - Croydon, St Martins-in-the-Field - London, The Dome - Brighton, and Chichester Cathedral.
He has taken part in the Maldon, Buxton, Cambridge, Brighton and Edinburgh festivals and abroad he has performed at the International Festival of Arezzo in Italy and at Elne in the South of France.


LEFT - A Spoonful of Sugar gig with the JP Big Band, Saffron & soloists Ellie and Bry.

Cantatrice were heard on Meet the Choir on Sunday 28 September 2014 at 4.30pm. This was a very special airing as it followed our 10th Anniversary celebrations and it was the last time that Laura played for us, so even more memorable and special. Our sincere thanks to Jose Peate (Zoe's mum) and Kirsty Mitchell  for being brave enough to speak - you were brilliant!
You can hear it on BBC Iplayer by follwing this link
http://www.bbc.co.uk/programmes/p027br9j